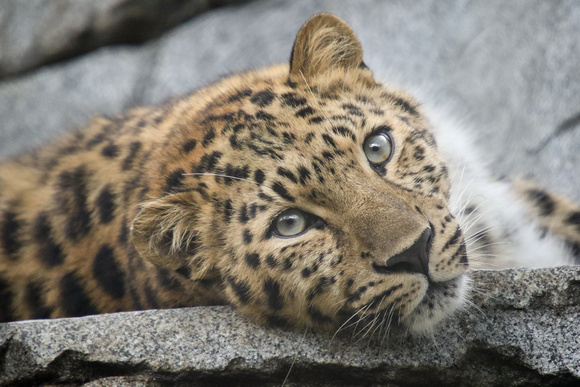 The introduction of Satka and Oskar went very well as first dates go! They were given access to come and go between each other’s exhibits over multiple days, and most of the time, Satka chose to join Oskar in his. She was adorably flirtatious, making her intentions clear through her playful movements. He seemed a bit unsure at first, but she definitely had his attention. She approached him now and then, vocalizing with low growls that might have been taken differently if it weren’t for the body language. Satka is a charmer, for sure, and after a few days Oskar was giving her a bit of affection and showing more confidence. Sometimes the strongest relationships start slow and easy, and this pair is looking like they have what it takes for future breeding! Oskar was doing a bit of head rubbing against the rock after the two were separated again, so maybe he was missing his girl. They’ll have lots of opportunities to get to know each other since Amur leopards can potentially breed all year round. Here’s to hoping they’ll fall in leopard love!