Created 4-Apr-16
1 photos
This little cutie is Belle the Bonobo. Still just a youngster, she was born December 21, 2013, at the Cincinnati Zoo. Her story is pretty special, since she had a bit of a rocky start. Just a few days after her birth, her mother Lisa contracted a virus, and so did she. Since Lisa was unable to care for her, the zoo staff took over her care until she could be reunited with her mother 20 days later. Here’s a link to that part of her history: http://www.cincinnati.com/story/news/2014/04/30/close-call-one-zoos-babies/8545395/.
She is now healthy, happy, and playful! Belle, along with her mother Lisa and her brother and sister, joined the bonobo troop at the San Diego Zoo in July of 2015. Bonobos are a rare and critically endangered great ape species native to the Democratic Republic of Congo. They are extremely intelligence primates and known for how well they get along. Belle has lots of fans, which is no surprise. She’s quite a character! 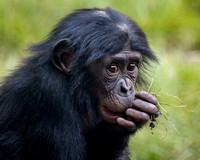