Created 26-Apr-14
1 photos
I love the rich tawny tones of the mountain lion’s face, and the two at the San Diego Zoo, Koya and Kima, are no exception. I haven’t been able to get many shots of them, when the light is right, so it’s a special event when I do. This is Koya, the female.

Here in southern California they are commonly called mountain lions, but they are also called cougar, and puma. They’ve been given many names by various people due to their wide distribution across North and South America.
The term mountain lion is technically incorrect since their territory is not limited to mountain regions, and they are unlike a lion since they cannot roar. They can growl, hiss, mew, and purr, and are known for a short, high-pitched scream and a whistle-like call.
Though the mountain lion is big in size, they are considered part of the small cat species. Males generally weigh between 115 and 220 pounds. The fact that they don’t roar is one of the defining characteristics of a small cat, along with what scientists know about their lineage.
I’m looking forward to seeing Koya and Kima in their new exhibit opening this summer by the upper end of the Skyfari! 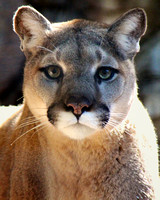