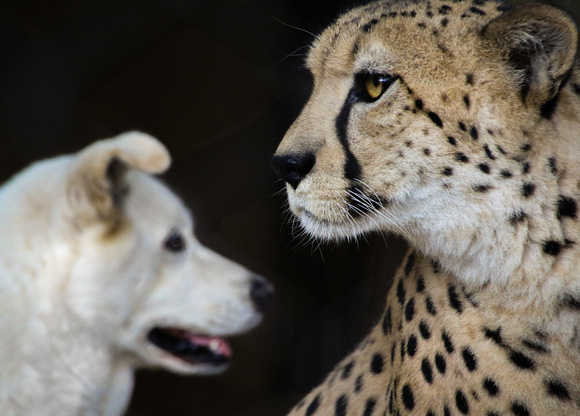 Everyone Needs a Little Support

Miley the female Husky Mix and Bakka the male Cheetah - Best Friends
I always enjoy seeing Bakka, the male cheetah, and Miley, the female husky-mix, together when they’re spending some time in the Animal Ambassador Area at the San Diego Zoo. I can’t tell you how many visitors I met who expressed their surprise that a cheetah and a dog would be together. It is truly a remarkable relationship, and one that warms my heart!

The SD Zoo has been pairing dogs with cheetahs since 1981, and it works beautifully. The cheetah, who would normally be more skittish in new situations, looks to the leadership of the dog for behavioral cues. The dog’s eagerness to be with people, and calm acceptance of new environments gives the cheetah confidence.
Most dog and cheetah pairs are introduced when they are both about 3 months old, but Bakka was already a year old and Miley was 2 when they met. Here’s a blog written shortly after they were put together:
http://blogs.sandiegozoo.org/2009/10/09/cheetah-and-dog-pals/
They’ve been companions for about 6 years now, and have a strong bond.Their friendship is pretty special!
©Penny Hyde
Powered by ZENFOLIO User Agreement
Cancel
Continue