Penny and Ramil - The Honeymoon

Created 14-Aug-18
7 photos
One of my favorite parts of Nighttime Zoo was watching the playful fun between Penny & Ramil in the cool of the evening while they were together on Center Street. Their interactions gave a glimpse into the sweet relationship that’s grown between these gorgeous snow leopards. They would appear happily nonchalant, until Penny got into prowling mode, hiding behind a rock or bush, with just her eyes visible as she focused intently on Ramil. He'd look like he had no idea she was being sneaky, but then he’d glance over, anticipating the game. At just the right moment, Penny would slink and then bound over to pounce on her boyfriend. There would be tussling and a harmony of growls, then one would take off and the other would give chase, sometimes scaling six feet up the wall to ricochet back to the ground. When the action settled, they'd go back to cool cat composure, softly sauntering with fluffy tails held high, or lounging up high on a platform to enjoy the view. Every so often one of them would approach the other to nuzzle and groom with gentle kisses. …And then it would start all over again!
Best romantic comedy of the summer!

The story within the story is the joy of seeing Ramil so happy after the tough time he’s had with his eye. He had a cataract that worsened resulting in loss of sight and increased pain despite ongoing treatment. But when he had the surgery to remove the eye, his freedom from pain was life changing. He was like a new cat! And now he’s the Prince Charming to his girlfriend, Penny the Snow Princess. Life is good! 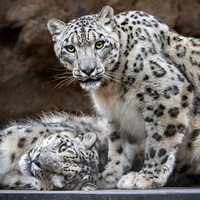 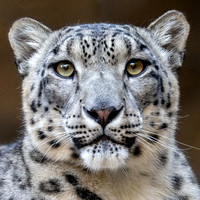 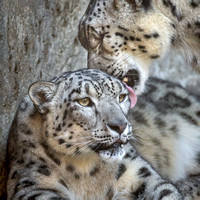