Created 18-Jul-14
8 photos
I love to visit Turbo at the San Diego Zoo. He always seems to having so much fun! He enjoys playing with whatever enrichment items the keepers have provided. One day I saw him carry (drag) a large tree stump all the way up to his loft with great concentration, only to have it roll off to the ground... so he did it all over again! He’s such an active bear, striking poses all around his exhibit, finding something to play with here and there, and sometimes enjoying a dip in his pool.
Turbo is an Andean bear, also known as spectacled bear because of the light colored fur around their eyes. The light markings on the head, throat and chest form a pattern that is different on each individual bear, like their own “fingerprint”. Andean bears also have long claws for climbing and digging for food. They are thought to be the best climbers of all the bear species.
Their diet consists mostly of fruit and plants, and they also eat sugarcane, corn, and honey. They are considered carnivores, but only about 5% of their diet comes from insects, small rodents, and birds.
They are the only bear native to South America. Since they live in a tropical climate, they are active throughout the year and do not hibernate. It’s likely that Paddington Bear, the fictional character from children’s literature, is an Andean bear, having come all the way from “darkest Peru”. 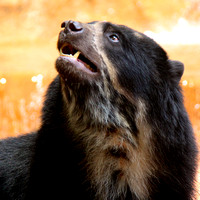 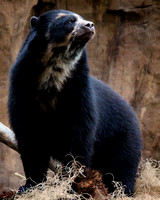 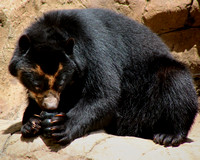 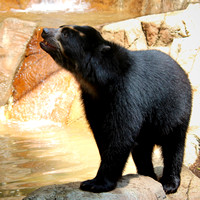