A Visit With the Grevy's Zebras

Created 7-Sep-13
14 photos
When I stopped by the Grevy's zebras during my latest visit to the zoo I felt a connection I'd never felt before. I was the only person there first thing in the morning, and I was immediately greeted by a zebra giving me his full attention. As I made small talk with him, another zebra approached, and I had four friendly eyes directed at me. I almost expected them to answer back, as they seemed very involved in the conversation. When a third zebra approached, they all broke into a bout of rowdy play, jumping around like pups and kicking up dust! I was thoroughly entertained! Then, as they settled, they came back over to visit, as if to be sure I was having a good time!
I feel fortunate just to see these beautiful creatures since there are so few of them left - less than 2500 in the African plains. The zebra is the world's largest wild equid, and the Grevy's is the largest species of zebra, also boasting the most tightly packed stripes - about 80 in all. Fast and strong, they can run up to 40 miles an hour, and have a very powerful kick. As to their stripes being black or white…they have black skin under their hair, but their belly is white, so I'd say the stripes are both: black AND white. 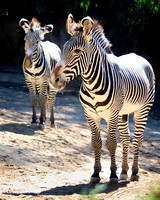 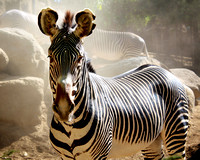 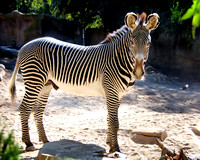 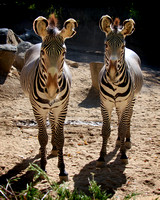 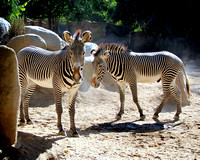 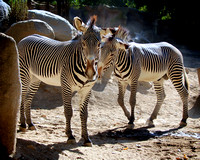 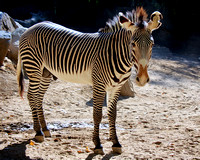 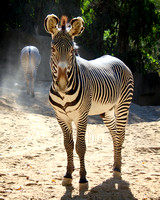